Posted on March 18, 2018 by rooftopproclaimer

It was a beautiful sun shiny day for the St. Patrick’s Day Parade in the town of Erin, WI. 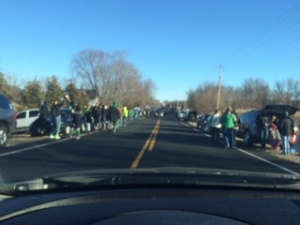 This year was unique as St. Patrick’s Day actually fell on a Saturday this year, so the crowd that was expected was going to be larger than normal. We were not disappointed. As I approached the parade route I was struck by the sea of humanity that was already gathered hours before the parade was to have begun.

We worked in conjunction with the saints from Lakewood Baptist Church who had over twenty volunteers assist at two tables that were setup along the parade route, stocked with cookies, cupcakes, coffee and hot chocolate. And oh yes, gospel tracts of course with strong evangelists who were able to well articulate the true message of the gospel.

As the disciples went out two by two, we also went among the crowd. I don’t think it would

be an exaggeration that thousands of tracts were handed out sharing the St. Patrick’s Day Quiz on one side and the Gospel on the other. We were also able to give out Million Dollar Bills to the adults and a special kid’s version. For the kids we also had the Albert Brainstein tract and the 10 Commandment Coins.

The crowd is always a mix of partiers, senior citizens, families with young children. Everyone is always friendly and for the most part willing to receive the tracts and engage in conversation. As in the book of Acts, some listened, some wanted to hear more, some scoffed, some believed, some knew the truth but we’re ready to trust in the true God and I’m sure there were some who wanted to pick up stones.

I had a young man, Eli, walk with me toward the north end of the parade route and we were able to engage in a number of good conversations. A gentleman named Mark, who was in his mid-sixty’s and had been Catholic growing up, converted to being Lutheran during his first marriage, and now was back to Catholic with his second wife, who was making him go back to church again. We were able to go through the law with him and as he came under conviction, he saw the need for the true Savior and not one obtained through ritual.

The picture here is that of a young man named Jake, who at 6’6″ was a friendly by

imposing figure and yet we were able to share the gospel with he and his friends.

There was another man and I’m guessing his son, who we were able to go through the law and the gospel. What stood out with these two was that as I had begun to speak with the father, I could tell the son was listening intently to what was being shared, so I made sure to turn my attention to him as well.

The conversation that stood out though was with two young men, Kevin and Josh. We had passed their table earlier and given them the St. Patrick’s Day Quiz and Kevin shared that he had been quizzing everyone in their group so I asked them how they had done on the Good Person test on the back side?

Josh started out rather combative by telling me that it was all garbage. When someone objects to the message, I don’t get discouraged but try to be firm and loving in my conversation. Josh is in the military and preparing for his second deployment, so as we made our way through the commandments, we needed to distinguish the difference between murder, killing and defending your country. We also talked about how God’s see’s hatred as murder in the heart just as he see’s lusting for the opposite sex as adultery in the heart. I shared with them that God will not only judge our actions but also our thoughts and intents of the heart. As both of the them tried to self-justify themselves and that they would be good enough to get into heaven (Josh thought that when he died he would just become worm 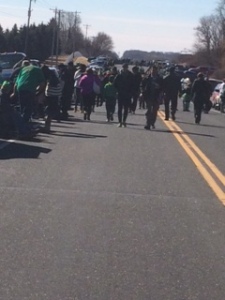 food), I asked them if a man raped and murdered their mom and was standing before a judge who would just let that man go, would he be a good judge. NO! was the answer. God must punish evil, I told them. They both agreed. As we left the table I shook their hands and urged them to read Genesis Chapters 1-11, because that explains how we got here and why this world is in the messed up state that it is and then I suggested they read the Gospel of John as that is God’s answer to the mess.

Please pray for all the souls that we encountered and that the Holy Ghost rescues them from the fire and the wrath that is to come.

We are local born-again Christians of Milwaukee Wisconsin, using our ambassadorship by preaching the gospel of Jesus Christ. We also help equip the body of Christ to witness by teaching biblical evangelism based on Scripture.
View all posts by rooftopproclaimer →
This entry was posted in Uncategorized. Bookmark the permalink.